The Bywater began as plantation land in the colonial era with each plantation owning a significant block or blocks of land. H.H. Slawson owned a plantation and the Washington sugar mill bounded by the streets known today as Clouet, Royal, Chartres, and Louisa Streets. His plantation residence still exists today and is home to the popular restaurant, The Country Club. By the early 1800s. the sugar mill gave way to progress and a brother took possession of 10 divided lots on the property, including the original stables at the corner of Louisa and Chartres and the adjacent blacksmith shop.

J.B. Slawson converted the corner lots, combined with the blacksmith house, to support his new venture The Rough & Ready Omnibus Line. This new thriving business developed several transport lines. The omnibus, or large carriage, is the precursor to the New Orleans streetcars. Twelve-person carriages pulled by a team of horses now graced the plantation grounds and the expanded stables. However, after the Civil War, the advent of streetcars replaced the omnibuses and in 1867 J.B. Slawson sold the land on the corner along with the blacksmith shop to Mary O’Connor. In 1892, the blacksmith shop was razed and a graceful Victorian shotgun-style house was built on the thousands of bricks that were laid layers deep for parking the omnibuses. 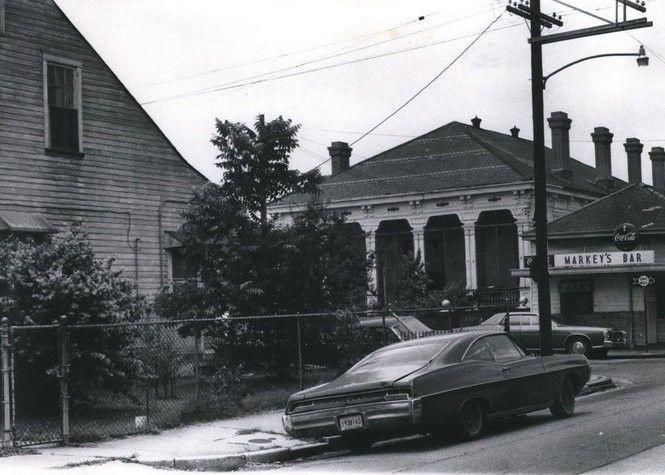 In 1990, I purchased the corner lot once slated as the plantation stables. In 1991, the first lot of the blacksmith shop was acquired and in 1992 the Victorian Shotgun home rejoined Mary O’Connor’s original homestead built-in 1868. This Italianate Creole Cottage is one of the last examples of this architectural style in the city of New Orleans. With the Victorian guesthouse, The Bywater Cottages offers a true reflection of the late 1800s and the emergence of the modern Bywater neighborhood.

As a working-class neighborhood, many of the Bywater residents worked along the wharves. Real estate development and speculation surrounding the 1984 Louisiana World Exposition prompted many real estate barons to buy up the Bywater neighborhood. But the economy turned for the worse and these barons stripped the architectural elements of the homes and converted them to section 8 housing. Within 15 years the neighborhood’s significance as a historic community was quickly being lost.

In the 1990s, the bohemian and artistic communities had spread to the Bywater and began refurbishing the homes. The perseverance of many business owners and amazing archetypes led way to the draw for these communities. With the advent of short-term rentals, the neighborhood took stock and is now one of the safest and most prodigious areas in New Orleans. Many of these iconic folks have passed along with their legends, but I would like to mention Roy Markey who still runs Markey’s Bar around the corner on Royal and Louisa Streets, a fourth-generation pub built in the early 1900s. Roy is a pinnacle in our neighborhood and deserves to have a glass raised in his honor.

Katrina solidified the direction of the Bywater, reminding us of its historical significance. Since 2005, the Bywater has seen a beautiful renaissance of building, restoration, and indie businesses evolve. The Bywater Cottages invite you to experience our community and the rich steepness of being unique.